DLC for Godfall features additional content of the game that is not available with the regular edition of the game. DLC usually contains pre-order bonuses, additional content, paid packs, and game expansions. This page covers all relevant information regarding the following DLCs that are released. 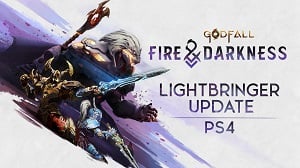 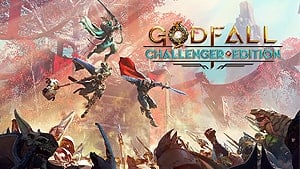 Platforms: PS5, PS4 for PS Plus Subscribers, and PC.

Godfall Ascended edition includes the base game, day one access to Godfall’s first expansion in 2021, plus the following Gold-themed digital goods to help you save Aperion in style: 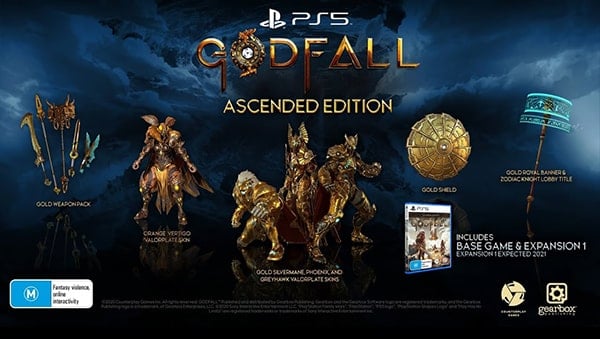 The Fire & Darkness DLC follows the story of the game which are events that happen after beating the main campaign. This DLC takes place on the Fire Realm where players who take on the role as remnants will need to fight once again to combat darkness itself in order to stop a cataclysm that can destroy the rest of the realms. The Fire Realm introduces a brand new environment with a gorgeous environment and exquisite graphics

In the Fire Realm which is only accessible if players purchase the Fire & Darkness DLC, players are treated with 12 new different missions, 5 new bosses, 4 new story missions, 5 hunting missions, and a single Explore the Realm mission. Apart from that, there is also some end-game content that is exclusive to this DLC such as:

The brand new Fire & Darkness DLC, as well as the Lightbringer Update, introduces a new feature that allows players to customize the look of their Valorplates which are Valorplate Skins. This new feature comes with 56 new skins across all Valorplates which are free to be unlocked by players and is a part of the Lightbringer update, while there are 30 cosmetic skins that are exclusive to the Fire & Darkness DLC.

What is the Lightbringer Update?

The Lightbringer Update introduces 40 new lootable items which branches out to new equipment and builds that players can try, but apart from that, a new type of item is introduced which is called Cursed Items, this further provides a new challenge and greater emphasis on character itemization.

What are Cursed Items?

If you want to amp up the challenge during your runs, then equipping a Cursed Item will make things even difficult yet rewarding for you in the end. Cursed Items are imbued with negative effects and are applied to the player's character once it is equipped. In order to remove the curse, the player must follow and complete the objective or task that is listed on the cursed item and once the criteria has been met, it grants a massive bonus which can turn the tides and give you that unique edge in combat. Once all the curses have been cleansed, the item turns into an "Awakened Item" which is deemed to be the most powerful items you can acquire in the game.

Godfall is a game that can be played on your own, but it makes the experience better if you play with your friends or other people. With the Lightbringer Update, a matchmaking system has been added that allows the player to team up with two other players to complete a run through the Ascended Tower of Trails or the new Lightbringer Mode. In addition, a new ping system is also added to enable better communication and coordination when it comes to completing objectives.

Changes in the Ascended Tower of Trials

There are a few changes to the Ascended Tower of Trials in the Lightbringer Update:

The Lightbringer Update has revamped the effects of the status ailments of the game, improving and adding more context to how players interact with it.

Effects that apply ailments are now guarantee to apply the status ailment when specific attacks are executed such as when you throw your shield, it can inflict certain ailments. Apart from that, ailments can now stack and be applied multiple times. Either applying a different ailment or increasing the same effect.

The effectiveness of how ailments are applied are now relevant depending on the strength of your attack. The higher the damage is, the stronger and higher effectiveness the ailment is applied and stakcs. Apart from that, there are also Ailment Power traits that can boost the capability of applying ailments to the enemies you encounter or even improve the duration of the effect.

There are now some items as well that will allow the player to consume ailments from enemies. Upon consuming an ailment, all stacked ailments are removed from the enemy and any remaining damage from the ailments is dealt to the enemy right away.

We have slightly reduced the strength of three items that were too powerful compared to other items. We feel that after these changes the items will still be effective when used in your builds, but they will be more in-line with other options in the game.